[Note for TomDispatch Readers: There are few pleasures greater for me at TomDispatch than posting the writings of Eduardo Galeano, whom I worked with for years in my other life as a book editor, and consider one of the greats of planet Earth. Today, thanks to the kindness of the editors of Nation Books and in my official absence — I’m on vacation — here are selections from his latest book, just out in paperback, Children of the Days: A Calendar of Human History. If you’ve never tried Galeano, then believe me, your life is missing a piece. Tom]

His book Open Veins of Latin America: Five Centuries of the Pillage of a Continent came out in 1971 and proved to be the first vampire thriller of our American imperial age. Its blood-sucker of a plot was too outrageous not to be mesmerizing: a country called the United States declares a “good neighbor” policy for those living in its hemisphere because they just look so tasty, and then proceeds to suck the economic blood out of country after country. Hollywood never topped it.  “True Blood” and “The Vampire Diaries” couldn’t hold an incisor to it; Buffy was a punk by comparison.

In 1995, when his book Soccer in Sun and Shadow came out, he won the World Cup of sports writing. No one was ever quicker on the page; every sentence, a goal.  Next to him, Pelé and Diego Maradona were second stringers.

The Pentagon invented the Internet for its own ends (and the NSA has used it just that way), but compared to him they were latecomers to techno-wizardry.  After all, in writing his Memory of Fire trilogy about the Americas, he rediscovered the long-lost time machine of H.G. Wells, brought it up to date, and used it — talk about interconnectivity — to weave the most vibrant lives in North and South America over thousands of years into an unforgettable tapestry of humanity.  Thirty years later, he dusted that machine off again, souped it up, stepped in and, like Odysseus on his voyages or Orpheus entering Hades, ventured into the human experience from ancient Ur to late last night.  The result: his monumental history of everything and everyone: Mirrors.

Back in 2000, in his book Upside Down, he proved a wizard of prediction.  Years ahead of the climate change movement and before the full-scale rise of the BRICS countries, which meant a vast new middle class married to the car and a North American version of the good life, he reminded his readers that, for the South to live like the North, humanity would need not one fading planet but many.

If you haven’t figured it out yet, I’m talking, of course, about the Uruguayan writer Eduardo Galeano.  He was, early in his professional life, a cartoonist and never lost the lightness of spirit that went with that role. Still, the world he observed and experienced in prison, in exile, year after year, decade after decade, especially through the eyes of the poor and those denied their voice, was anything but light.  Yet he approached the underworld of history with an empathy and understanding which is almost indescribable.  His friends died in struggles across Latin America and yet, in an act of wizardry, he was capable of bringing them back to life on the page. He heard voices no one else could hear and similarly brought them to life and so to our attention.

He has only to appear — I’ve witnessed this personally — and people he’s never met have the sudden urge to tell him stories they would tell no one else. And he was and remains, among so many other things, a man who always had an eye for the particular trials (and terrors and losses and triumphs) of women in a world that generally preferred to ignore whatever they did or dreamed of doing. He has nothing of the “mansplainer” in him. And so, today, thanks to the editors of Nation Books, here are passages on women from his most recent work, just out in paperback, Children of the Days: A Calendar of Human History. Think of it as a secular prayer book for any year. Tom

A World of Violence

[The following passages are excerpted from Eduardo Galeano’s book Children of the Days: A Calendar of Human History, just out in paperback (Nation Books).]

In 1919 Rosa Luxemburg, the revolutionary, was murdered in Berlin.

Her killers bludgeoned her with rifle blows and tossed her into the waters of a canal.

Along the way, she lost a shoe.

Some hand picked it up, that shoe dropped in the mud.

Every day, some hand picks up that banner.

The Celebration That Was Not
(February 17)

The peons on the farms of Argentina’s Patagonia went out on strike against stunted wages and overgrown workdays, and the army took charge of restoring order.

Executions are grueling. On this night in 1922, soldiers exhausted from so much killing went to the bordello at the port of San Julián for their well-deserved reward.

But the five women who worked there closed the door in their faces and chased them away, screaming, “You murderers! Murderers, get out of here!”

The whores. The virtuous.

In the year 1901, Elisa Sánchez and Marcela Gracia got married in the church of Saint George in the Galician city of A Coruña. 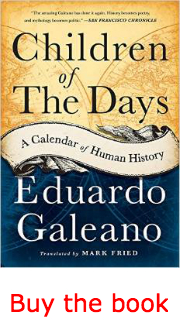 Elisa and Marcela had loved in secret. To make things proper, complete with ceremony, priest, license and photograph, they had to invent a husband. Elisa became Mario: she cut her hair, dressed in men’s clothing, and faked a deep voice.

When the story came out, newspapers all over Spain screamed to high heaven — “this disgusting scandal, this shameless immorality” — and made use of the lamentable occasion to sell papers hand over fist, while the Church, its trust deceived, denounced the sacrilege to the police.

And the chase began.

Elisa and Marcela fled to Portugal.

In Oporto they were caught and imprisoned.

But they escaped. They changed their names and took to the sea.

In the city of Buenos Aires the trail of the fugitives went cold.

The Right to Bravery
(August 13)

In 1816 the government in Buenos Aires bestowed the rank of lieutenant colonel on Juana Azurduy “in virtue of her manly efforts.”

She led the guerrillas who took Cerro Potosí from the Spaniards in the war of independence.

War was men’s business and women were not allowed to horn in, yet male officers could not help but admire “the virile courage of this woman.”

After many miles on horseback, when the war had already killed her husband and five of her six children, Juana also lost her life. She died in poverty, poor even among the poor, and was buried in a common grave.

Nearly two centuries later, the Argentine government, now led by a woman, promoted her to the rank of general, “in homage to her womanly bravery.”

The centenary celebrations were over and all that glowing garbage was swept away.

And the revolution began.

History remembers the revolutionary leaders Zapata, Villa, and other he-men. The women, who lived in silence, went on to oblivion.

A few women warriors refused to be erased:

Encarnación Mares, who cut her braids and reached the rank of second lieutenant hiding under the brim of her big sombrero, “so they won’t see my woman’s eyes”;

Amelia Robles, who had to become Amelio and who reached the rank of colonel;

Petra Ruiz, who became Pedro and did more shooting than anyone else to force open the gates of Mexico City;

Rosa Bobadilla, a woman who refused to be a man and in her own name fought more than a hundred battles;

and María Quinteras, who made a pact with the Devil and lost not a single battle. Men obeyed her orders. Among them, her husband.

The Mother of Female Journalists
(November 14)

Jules Verne did not believe that this pretty little woman could circle the globe by herself in less than eighty days.

But Nellie put her arms around the world in seventy-two, all the while publishing article after article about what she heard and observed.

This was not the young reporter’s first exploit, nor would it be the last.

To write about Mexico, she became so Mexican that the startled government of Mexico deported her.

To write about factories, she worked the assembly line.

To write about prisons, she got herself arrested for robbery.

To write about mental asylums, she feigned insanity so well that the doctors declared her certifiable. Then she went on to denounce the psychiatric treatments she endured, as reason enough for anyone to go crazy.

In Pittsburgh when Nellie was twenty, journalism was a man’s thing.

That was when she committed the insolence of publishing her first articles.

Thirty years later, she published her last, dodging bullets on the front lines of World War I.

International Day for the Elimination of Violence Against Women
(November 25)

In the jungle of the Upper Paraná, the prettiest butterflies survive by exhibiting themselves. They display their black wings enlivened by red or yellow spots, and they flit from flower to flower without the least worry. After thousands upon thousands of years, their enemies have learned that these butterflies are poisonous. Spiders, wasps, lizards, flies, and bats admire them from a prudent distance.

On this day in 1960 three activists against the Trujillo dictatorship in the Dominican Republic were beaten and thrown off a cliff. They were the Mirabal sisters. They were the prettiest, and they were called Las Mariposas, “The Butterflies.”

The Art of Living
(December 9)

In 1986 the Nobel Prize for medicine went to Rita Levi-Montalcini.

In troubled times, during the dictatorship of Mussolini, Rita had secretly studied nerve fibers in a makeshift lab hidden in her home.

Years later, after a great deal of work, this tenacious detective of the mysteries of life discovered the protein that multiplies human cells, which won her the Nobel.

She was about eighty by then and she said, “My body is getting wrinkled, but not my brain. When I can no longer think, all I’ll want is help to die with dignity.”

Eduardo Galeano is one of Latin America’s most distinguished writers. He is the author of Open Veins of Latin America, the Memory of Fire Trilogy, Mirrors, and many other works. His newest book, Children of the Days: A Calendar of Human History (Nation Books), is just out in paperback and is excerpted in this piece.  He is the recipient of many international prizes, including the first Lannan Prize for Cultural Freedom, the American Book Award, and the Casa de las Américas Prize.

Mark Fried is the translator of seven books by Eduardo Galeano including Children of the Days. He is also the translator, among other works, of Firefly by Severo Sarduy. He lives in Ottawa, Canada.