[Note for TomDispatch Readers: I’ve said it before, but do yourself a favor.  If you haven’t read Eduardo Galeano, buy his new book, Children of the Days: A Calendar of Human History, right now. You won’t regret it.  And when you’re done, pick up Mirrors, his history of the world in 300-odd fabulous pages, and then the Memory of Fire trilogy, his history of the Americas in three dazzling volumes, and so on.

In the meantime, thanks to Nation Books and Galeano’s splendid literary agent Susan Bergholz, TomDispatch is able to take a rare summer second dip into Children of the Days, a kind of prayer book for our time: a page a day for 365 days focused on what’s most human and beautiful, as well as what’s most grasping and exploitative, on this small, crowded planet of ours.  Today, the focus is war, American-style.]

It could be any week on that great U.S. military base we know as Planet Earth and here’s the remarkable thing: there’s always news.  Something’s always happening somewhere, usually on more than one continent, as befits the largest, most destructive, most technologically advanced (and in many ways least successful) military on the planet.  In our time, the U.S. military has been sent into numerous wars, failed to win a single one, and created plenty of blowback.  But hey, who has to win a specific war when it’s “wartime” all the time?

These last weeks were the American military equivalent of a no-news period.  Nothing really happened.  I mean, yes, there was the war in Afghanistan, the usual round of night raids, dead civilians, and insider attacks.  Nothing worth spending much time on, other than whether the U.S. might, in frustration over Afghan President Hamid Karzai, exercise the “zero option” after 2014 and leave – or not.  And yes, there was that drone attack last week in the tribal borderlands of Pakistan that killed three “militants” (or so we’re told), despite the complaints of the country’s new government.  (I mean, what say should it have in the matter?)

And there was the news that Washington was seeking an “expanded role” for its military in the Philippines, where the question of the month was: Could the Pentagon “position military equipment and rotate more personnel” there, “while avoiding the contentious issue of reestablishing American bases in the country” — so said “officials from both countries,” according to the New York Times.  After all, if we call the places where our troops are stationed “Philippine bases,” what’s the problem? And, believe me, no one wants to hear a lot of whining about it from a bunch of Filipinos either!

And don’t forget about those American drones now flying over Mali from a base recently established in Niger, part of a blowback-generating set of Pentagon operations on the African continent.  They got a little attention last week.  And one more thing, conveniently on the same continent: since Secretary of Defense Chuck Hagel and Joint Chiefs Chairman General Martin Dempsey put in calls to their Egyptian counterparts as they were launching a military coup in an ongoing pre-revolutionary situation, the Pentagon has, it seems, never been less than in touch with its Egyptian military pals, a crew significantly trained, advised, and paid for by Washington.

And that’s just what made it into the news in the most humdrum military week of 2013.  Today, Eduardo Galeano, one of the great global writers, takes us from 1916 to late tomorrow night via eight little excerpts from his new book, Children of the Days: A Calendar of Human History, reminding us of what some really newsworthy moments were like.  Think of it as a kind of highlight reel from almost a century of the American way of war. Tom

And Other Headlines from an Upside Down History of the U.S. Military and the World
By Eduardo Galeano

[The following passages are excerpted from Eduardo Galeano’s new book, Children of the Days: A Calendar of Human History (Nation Books).]

On this early morning in 1916, Pancho Villa crossed the border with his horsemen, set fire to the city of Columbus, killed several soldiers, nabbed a few horses and guns, and the following day was back in Mexico to tell the tale.

This lightning incursion is the only invasion the United States has suffered since its wars to break free from England.

In contrast, the United States has invaded practically every country in the entire world.

The names are an enigma as indecipherable as the Holy Trinity.

In 1945, while this day was dawning, Hiroshima lost its life. The atomic bomb’s first appearance incinerated this city and its people in an instant.

The few survivors, mutilated sleepwalkers, wandered among the smoking ruins. The burns on their naked bodies carried the stamp of the clothing they were wearing when the explosion hit. On what remained of the walls, the atom bomb’s flash left silhouettes of what had been: a woman with her arms raised, a man, a tethered horse. 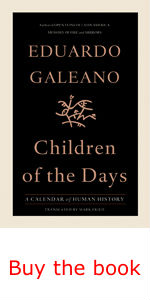 Three days later, President Harry Truman spoke about the bomb over the radio.

He said: “We thank God that it has come to us, instead of to our enemies; and we pray that He may guide us to use it in His ways and for His purposes.”

It was among the largest military expeditions ever launched in the history of the Caribbean. And it was the greatest blunder.

The dispossessed and evicted owners of Cuba declared from Miami that they were ready to die fighting for devolution, against revolution.

The US government believed them, and their intelligence services once again proved themselves unworthy of the name.

On April 20, 1961, three days after disembarking at the Bay of Pigs, armed to the teeth and backed by warships and planes, these courageous heroes surrendered.

The World Upside Down
(March 20)

On the heels of the bombs, Iraqi troops invaded U.S. soil.

There was collateral damage. Many civilians, most of them women and children, were killed or maimed. No one knows how many, because tradition dictates tabulating the losses suffered by invading troops and prohibits counting victims among the invaded population.

The war was inevitable. The security of Iraq and of all humanity was threatened by the weapons of mass destruction stockpiled in United States arsenals.

There was no basis, however, to the insidious rumors suggesting that Iraq intended to keep all the oil in Alaska.

Around this time in 2010 it came out that more and more US soldiers were committing suicide. It was nearly as common as death in combat.

The world is becoming an immense military base, and that base is becoming a mental hospital the size of the world. Inside the nuthouse, which ones are crazy? The soldiers killing themselves or the wars that oblige them to kill?

Geronimo led the Apache resistance in the nineteenth century.

This chief of the invaded earned himself a nasty reputation for driving the invaders crazy with his bravery and brilliance, and in the century that followed he became the baddest bad guy in the West on screen.

Keeping to that tradition, “Operation Geronimo” was the name chosen by the U.S. government for the execution of Osama bin Laden, who was shot and disappeared on this day in 2011.

But what did Geronimo have to do with bin Laden, the delirious caliph cooked up in the image laboratories of the U.S. military? Was Geronimo even remotely like this professional fearmonger who would announce his intention to eat every child raw whenever a U.S. president needed to justify a new war?

The name was not an innocent choice: the U.S. military always considered the Indian warriors who defended their lands and dignity against foreign conquest to be terrorists.

Good news. On this day in the year 2011 the world’s military brass announced that drones could continue killing people.

These pilotless planes, crewed by no one, flown by remote control, are in good health: the virus that attacked them was only a passing bother.

As of now, drones have dropped their rain of bombs on defenseless victims in Afghanistan, Iraq, Pakistan, Libya, Yemen, and Palestine, and their services are expected in other countries.

In the Age of the Almighty Computer, drones are the perfect warriors. They kill without remorse, obey without kidding around, and they never reveal the names of their masters.

In 1986, President Ronald Reagan took up the spear that Richard Nixon had raised a few years previous, and the war against drugs received a multimillion-dollar boost.

From that point on, profits escalated for drug traffickers and the big money-laundering banks; more powerful drugs came to kill twice as many people as before; every week a new jail opens in the United States, since the country with the most drug addicts always has room for a few addicts more; Afghanistan, a country invaded and occupied by the United States, became the principal supplier of nearly all the world’s heroin; and the war against drugs, which turned Colombia into one big U.S. military base, is turning Mexico into a demented slaughterhouse.

Eduardo Galeano is one of Latin America’s most distinguished writers. He is the author of Open Veins of Latin America, the Memory of Fire Trilogy, Mirrors, and many other works. His newest book, Children of the Days: A Calendar of Human History (Nation Books) has just been published in English. He is the recipient of many international prizes, including the first Lannan Prize for Cultural Freedom, the American Book Award, and the Casa de las Américas Prize.

Follow TomDispatch on Twitter and join us on Facebook or Tumblr. Check out the newest Dispatch book, Nick Turse’s The Changing Face of Empire: Special Ops, Drones, Proxy Fighters, Secret Bases, and Cyberwarfare.

This post is excerpted from Children of the Days: A Calendar of Human History Copyright © 2013 by Eduardo Galeano; translation copyright © 2013 by Mark Fried. Published by Nation Books, A member of the Perseus Group, New York, NY. Originally published in Spanish in 2012 by Siglo XXI Editores, Argentina, and Ediciones Chanchito, Uruguay. By permission of Susan Bergholz Literary Services, New York City, and Lamy, N.M. All rights reserved.