[Note for TomDispatch Readers: Next Sunday’s event in New York City is already being pre-billed as “the largest climate change demonstration in history.” (It doesn’t actually have that much competition.) My hope is that anyone who can get here will help make it impressively so, if for no other reason — and there are plenty — than because it feels good once in a while to know that you’re not alone. You’ll find all the information you need about the timing and logistics of the march by clicking here. So, if you can, turn out and join the 1,100 groups that have already endorsed the march and the 20 marching bands slated to be on hand. See you there! Tom]

It was June 12, 1982. My daughter was still in her stroller, my son as yet unborn, when my wife and I, six friends, and another child in a stroller joined an estimated million people in New York City at the largest antinuclear protest in history. All of the adults in our party had grown up in a world unsettled in a unique way: Armageddon had, for the first time, potentially become a secular event. End times were no longer God’s choice for us, but ours for ourselves. It seemed no mistake that, three decades into the Cold War, the nuclear readiness of the two superpowers was referred to as “mutual assured destruction,” about as graphic a phrase as you could find for the end of civilization; and, of course, it had its own acronym which, to us at least, seemed less like an abbreviation than sardonic commentary: MAD.

In 1979, a near-catastrophe at the Three Mile Island nuclear plant in Pennsylvania helped launch a new iteration of the antinuclear movement. Initially, it was focused on “peaceful” nuclear power, and then, amid a renewed superpower arms race, on the potential destruction of the planet in a MAD conflagration; in the atmosphere of that moment, that is, we found ourselves living with a renewed sense that the world might not be ours or anyone else’s for long.

The first nuclear weapon had been detonated at the White Sands Proving Ground in New Mexico on July 16, 1945, just four days before I turned one, which meant world-ending fears and dreams would be woven into my life. So, with a child of my own, it felt right to be in that giant crowd of protestors, marching near a contingent of hibakusha, or survivors, from the Hiroshima and Nagasaki atomic blasts that had, thanks to America’s “victory weapon,” ushered in the nuclear age.

In 1991, only nine years later, the Soviet Union, that other superpower, would disappear. If you had told me then, with the Berlin Wall down and not an enemy in sight, that almost a quarter of a century later — with two of our 1982 marchers dead — most of the rest of us would be planning to meet and march again, lest our children’s children have no world worth living in, I would have been surprised indeed. And I would have been no less surprised to learn that the U.S. and Russia still preserve, update, and upgrade monstrous nuclear arsenals that contain enough weapons to destroy a number of Earth-sized planets, or that those weapons continue to proliferate globally, or that, as we now know (given the “nuclear winter” phenomenon), even a “modest” regional nuclear exchange between India and Pakistan could result in an event of unimaginable horror for humanity. Told all this, I would undoubtedly have wondered where the then-much-talked-about post-Cold War “peace dividend” had gone.

Had you also told me that, on September 21, 2014, I would be planning to be out with my wife, my old friends, my son, my daughter, my son-in-law, and my grandson marching in New York City, but this time against a second human-produced potential apocalypse, and that it was already happening in something like slow motion, I would have been stunned.

And yet so it is, and there I will be at the People’s Climate March, and I wouldn’t be anywhere else that day. At some future moment, wouldn’t it be sad to say that humanity’s greatest achievement was to exploit to the fullest two energy sources — the atom and fossil fuels — capable of destroying the basis for our lives on this planet, and potentially much other life as well? What a strange possible epitaph for humanity: what we burned burned us.

At 70, this world won’t be mine for that much longer, so it’s not a matter of my life or my planet, but I only have to look at my grandson to know what’s at stake, to know that this is not the world he or his peers deserve. To make global warming his inheritance could represent the greatest crime in history, which means that those who run the giant energy companies (and the oil states that go with them) and who know better will be the ultimate criminals.

No single march, of course, will alter the tide — or perhaps I mean the greenhouse gases — of history, but you have to begin somewhere (and then not stop). And to do so, you have to believe that the human ability to destroy isn’t the best we have to offer and to remind yourself of our ability to protest, to hope, to dream, to act, and to say no to the criminals of history and yes to the children to come. Tom

On Sunday, September 21st, a huge crowd will march through the middle of Manhattan. It will almost certainly be the largest rally about climate change in human history, and one of the largest political protests in many years in New York. More than 1,000 groups are coordinating the march — environmental justice groups, faith groups, labor groups — which means there’s no one policy ask. Instead, it’s designed to serve as a loud and pointed reminder to our leaders, gathering that week at the United Nations to discuss global warming, that the next great movement of the planet’s citizens centers on our survival and their pathetic inaction.

As a few of the march’s organizers, though, we can give some sense of why we, at least, are marching, words we think represent many of those who will gather at Columbus Circle for the walk through midtown Manhattan.

We march because the world has left the Holocene behind: scientists tell us that we’ve already raised the planet’s temperature almost one degree Celsius, and are on track for four or five by century’s end. We march because Hurricane Sandy filled the New York City subway system with salt water, reminding us that even one of the most powerful cities in the world is already vulnerable to slowly rising ocean levels.

We march because we know that climate change affects everyone, but its impacts are not equally felt: those who have contributed the least to causing the crisis are hit hardest, here and around the world. Communities on the frontlines of global warming are already paying a heavy price, in some cases losing the very land on which they live. This isn’t just about polar bears any more. 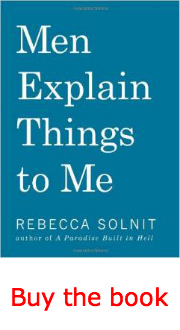 But since polar bears can’t march, we march for them, too, and for the rest of creation now poised on the verge of what biologists say will be the planet’s sixth great extinction event, one unequalled since the last time a huge asteroid struck the Earth 66 million years ago.

And we march for generations yet to come, our children, grandchildren, and their children, whose lives will be systematically impoverished and degraded. It’s the first time one century has wrecked the prospects of the millennia to come, and it makes us mad enough to march.

We march with hope, too. We see a few great examples around the world of how quickly we could make the transition to renewable energy. We know that if there were days this summer when Germany generated nearly 75% of its power from renewable sources of energy, the rest of us could, too — especially in poorer nations around the equator that desperately need more energy. And we know that labor-intensive renewables would provide far more jobs than capital-intensive coal, gas, and oil.

And we march with some frustration: why haven’t our societies responded to 25 years of dire warnings from scientists? We’re not naïve; we know that the fossil fuel industry is the 1% of the 1%. But sometimes we think we shouldn’t have to march. If our system worked the way it should, the world would long ago have taken the obvious actions economists and policy gurus have recommended — from taxing carbon to reflect the damage it causes to funding a massive World War II-scale transition to clean energy.

Marching is not all, or even most, of what we do. We advocate; we work to install solar panels; we push for sustainable transit. We know, though, that history shows marching is usually required, that reason rarely prevails on its own. (And we know that sometimes even marching isn’t enough; we’ve been to jail and we’ll likely be back.)

We’re tired of winning the argument and losing the fight. And so we march. We march for the beaches and the barrios. We march for summers when the cool breeze still comes down in the evening. We march because Exxon spends $100 million every day looking for more hydrocarbons, even though scientists tell us we already have far more in our reserves than we can safely burn. We march for those too weak from dengue fever and malaria to make the journey. We march because California has lost 63 trillion gallons of groundwater to the fierce drought that won’t end, and because the glaciers at the roof of Asia are disappearing. We march because researchers told the world in April that the West Antarctic ice sheet has begun to melt “irrevocably”; Greenland’s ice shield may soon follow suit; and the waters from those, as rising seas, will sooner or later drown the world’s coastlines and many of its great cities.

We don’t march because there’s any guarantee it will work. If you were a betting person, perhaps you’d say we have only modest hope of beating the financial might of the oil and gas barons and the governments in their thrall. It’s obviously too late to stop global warming entirely, but not too late to slow it down — and it’s not too late, either, to simply pay witness to what we’re losing, a world of great beauty and complexity and stability that has nurtured humanity for thousands of years.

There’s a world to march for — and a future, too. The only real question is why anyone wouldn’t march.

Eddie Bautista is executive director of the New York City Environmental Justice Alliance. LaTonya Crisp-Sauray is the recording secretary for the Transport Workers Union Local 100. Bill McKibben is the founder of 350.org and a TomDispatch regular.